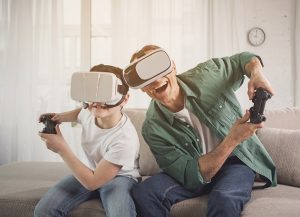 First person shooter games, or FPS, are played from the point of view of the main character. This genre of video games typically shows the character’s arms toward the bottom of the screen carrying their weapon of choice. FPS games like Doom Eternal require faster ping rates in order to keep players on pace with real-time action.

Real-time strategy games are time-based and make players use available resources to defend their base and defeat an opponent who has the same goals. A real-time strategy game which features a constantly evolving game state can be played on a PC, but a gaming console like the Xbox 360 can help maximize slower internet speeds and ping rates.

RPGs or role-playing video games allow gamers to control a fictional character and complete a quest in a fantasy world. RPGs typically include levels or stats that can be improved, a menu-based combat system and a quest that drives the storyline of the game.

Massively multiplayer online video games take place in a fictional world where millions of people just like you are playing in a role-playing environment. The goal is not to “complete” the game, as in standard RPGs, but to build up a character’s experiences, skills and resources. Communication within the game via Skype requires more bandwidth.

Pro tip: Gaming systems and services often give minimum internet speed recommendations for optimum performance. These suggestions are usually based on a single player and are most helpful as a starting point. If your household has multiple gamers, multiply these speeds by the number of users that will utilize your connection.